Contrary to the conclusions of a report released last month by the pro-privatization Pioneer Institute, the MBTA paid workers about the same and spent less of their budget on worker salaries, when compared to other large bus systems.

These new findings call into question the Pioneer Institute’s white paper, which appears to have cherry-picked data and drawn conclusions based on comparisons with other metropolitan bus agencies that have significantly newer fleets and lower costs of living, among other factors that were not accounted for in the report. 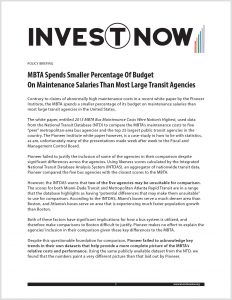